Public research spaces in Raleigh, the Western Regional Archives in Asheville and the Outer Banks History Center will open to the public on a limited basis. Learn more

FOA donations support the State Archives of North Carolina in several ways: preservation and conservation of our documents; purchase of photos and documents to add to Special Collections; and paid internships which allow the next generation archivists to have hands on experience.

The Friends of the Archives contributes to the collecting efforts of the State Archives by funding the select acquisition of collections. For example, the Friends used funds to acquire for the State Archives’ Military Collection the correspondence of David M. Kithcart, which documents the U.S. Army service of Maj. David M. Kithcart of Gastonia, N.C., an African American officer, along the Korean DMZ from 1965 to 1966 during the Cold War.

Money raised by previous crowdfunding efforts funded the work of local historian Karl Larson, who was instrumental in researching and identifying the unidentified photographs in the State Archives holdings. Next up is a crowdfunding campaign to fund projects in the State Archives Military Collection. Currently the Military Collection has a trove of unprocessed historical materials: artwork, letters, photographs, and posters—all created by or documenting North Carolinians from all over the state—including children’s WWII home front posters, photographs of Red Cross activities, letters from a US Navy sailor in the Pacific Theater, and letters from an African American army officer in Korea. The funds raised will go toward hiring a part-time contract archivist to arrange and describe the records so the State Archives can provide researchers and the general public better access and introduce these gems to a wider audience.

Thanks to generous donations by the Friends of Archives and the Friends of the Outer Banks History Center, the Photo Unit restored Umatic and Betacam SP video players expanding our AV conversion capabilities. These magnetic tape formats were used for professional video from the 1970s to the 1990s. The restored equipment enables us to digitize those materials, part of our ongoing effort to preserve the historical records in our collections stored on magnetic tape, an inherently impermanent medium.

Some of North Carolina’s most valuable historical documents need critical preservation and restoration. We encourage you to consider donating toward our most pressing preservation projects:

We have raised over $5,000 of the approximate $12,000 needed for the preservation of these documents. 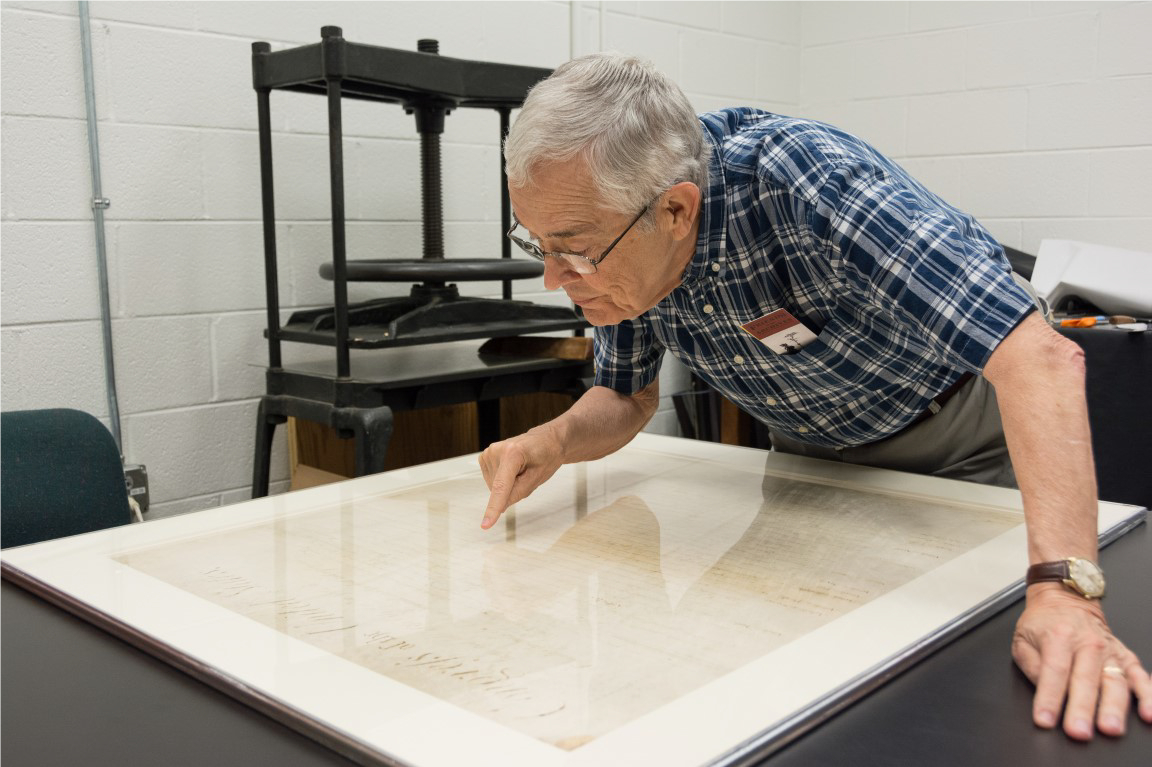 A successful fundraising campaign by the Friends of the Archives group has allowed an important preservation component to be added to the framing packages of the Bill of Rights and all four pages of the 1663 Carolina Charter. All five large, framed parchment documents were placed in sealed packages with state of the art materials designed to maintain a stable humidity level, protecting the parchment from unwanted environmental fluctuations. New glazing that filters 99 percent of damaging ultraviolet radiation, and is antistatic and antireflective, was added to each frame. The Bill of Rights had been placed in its conservation grade matting relatively recently, but all four pages of the 1663 Carolina Charter needed an update. The large manuscripts were all removed from their old matting and attached to new 100-percent-cotton museum-grade mat board using a thread-mount system that allows for the natural expansion and contraction of the parchment. Thank you to all who donated to this important cause!